Keeping accurate records not only is best practice for good data management, it is an important component for maintaining compliance with federal regulations, institutional requirements, and professional standards. iProtocol retains every protocol version created and submitted; each protocol version retains the versions of any uploaded documents including consent forms, permission forms, and study instruments. iProtocol helps researchers retain the documents they need in order to document compliance with IRB-SBS review (though researchers will need to retain consent documents, etc., used during the study as well; please see Record Keeping for more information). 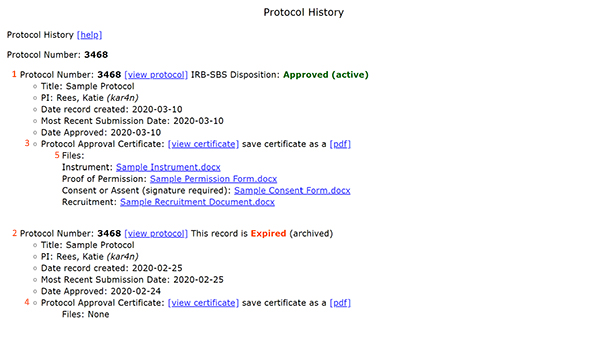 The records are ordered according to the protocol's submission and review history, and the first record is the most recent version. If the protocol is currently approved, the top record will have a green "approved" label. If you created a copy of the protocol but it hasn't been approved yet, the top version will have an IRB-SBS Disposition of "In Development." "Expired" refers to older versions that are no longer active (the protocol in general isn't considered "expired" unless the most recent record is "expired.")

In the example above, in 1, the protocol is "approved" whereas in 2, the previous version of the protocol, is "expired"; selecting the "view protocol" link in 2 will reveal the protocol form as it existed for that version as well as the approval certificate for that version (see 4). Using the link in 3 reveals the current protocol approval certificate. The files in 5 are the current files for the protocol; the previous version (2) did not have files attached but if it had, they would have been the versions submitted for that protocol version.