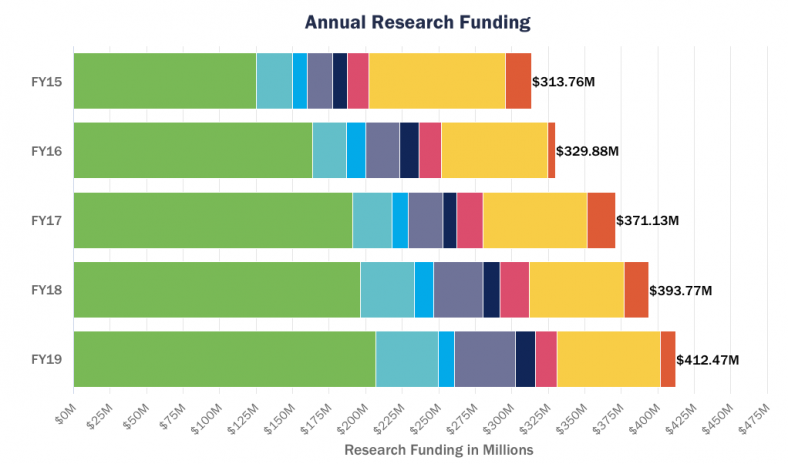 One of the goals of the University of Virginia’s strategic plan is to continually grow its research funding base. For five consecutive years, research funding has indeed grown steadily, from $311 million in 2014-15 to $412 million in sponsored funding in 2018-19, a 32.5% increase.

The growth is a result of the University continually expanding the diversity of its research programs and winning funding from a range of sources, including foundations, said Melur K. “Ram” Ramasubramanian, UVA’s vice president for research.

“We are pleased to see our investment in research and research infrastructure is maintaining momentum and continuing to provide a competitive edge for our researchers in securing federal and other grants,” Ramasubramanian said.

Ramasubramanian’s office reports that in 2018-19 alone, funding was up 4.6% over the previous year, with a 2.1% increase in the total number of awards. Fifty-six of the awards across the University’s 12 schools were for $1 million or more.

Overall, federal funding is up by $129 million over five years, representing a 64% increase.

“The growth in federal dollars speaks to the effectiveness of UVA’s faculty in securing funding for their ideas in a highly competitive environment,” Ramasubramanian said.

“Department of Defense funding went up significantly this year due to several new awards, such as a large Defense Department award to Kevin Skadron in engineering for developing new computer architecture, and awards that the new Biocomplexity Institute brought to UVA,” Ramasubramanian said.

One of UVA’s strategies, Ramasubramanian said, will be to improve the success rate of winning large-scale, center-level and institute-level federal grants to dramatically increase overall funding.

The University’s strategic plan focuses on five areas: democracy, environmental resilience and sustainability, precision medicine, the brain and neuroscience, and digital technology and society. Each area draws on UVA’s existing strengths, and represents both challenges and opportunities, Ramasubramanian said.

“The University is taking a coordinated approach through its centers, institutes, initiatives and labs to amplify the work of our faculty,” he said.

“Our outstanding teams of faculty, staff and students across all the schools have propelled us over the $400 million mark in research funding,” Executive Vice President and Provost Liz Magill said. “Meanwhile, researchers in the five focus areas are targeting interdisciplinary approaches that improve the chances of receiving grants down the road. I look forward to celebrating their continued success.”

Here are some of the larger grants that helped the University reach $412 million in 2018-19:

Communications Manager, Office of the Vice President for Research